While the solo shows feature new commissions and existing works, the performances are in great hitherto unseen. The visual identity, architectural project, international partnerships, curatorship of publications and editorial project are also announced 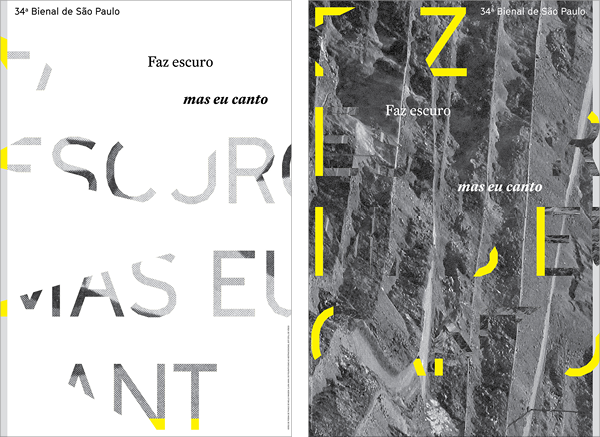 Characterized by joint effort and mutual leverage between the curatorial project and institutional activity, the 34th Bienal de São Paulo emphasizes the poetics of “relation.” To this end, it has adopted an innovative operational structure, which involves the holding of shows and actions presented at the Bienal Pavilion from February 2020, coupled with the articulation of a network of more than twenty São Paulo institutions. Once the Bienal Pavilion is completely occupied by the edition’s main show, opening in September 2020, these institutions will hold, in their own spaces, exhibitions that are part of the 34th Bienal.

As previously announced, the operation of the 34th Bienal de São Paulo is based on three different axes: space, time and depth. In time, it extends, beginning in February 2020 with three solo shows and three short-duration performative actions that will occupy certain areas of the Bienal Pavilion at different moments and introduce some of the themes that will be developed in the main exhibition – which will begin in September 2020, and will include the works featured in the solo shows. The artworks of the solo shows will thus reappear in the large group show, in new contexts but also bearing the meanings acquired in their previous showings.

Were invited for the three solo shows artists from different lines of research and backgrounds, but similar in the sense of having prolific, complex and instigating productions: the Peruvian Ximena Garrido-Lecca (b. 1980, Lima), the Brazilian Clara Ianni (b. 1987, São Paulo, SP),  and the North American Deana Lawson (b. 1979, Rochester, NY). Each of these shows will be accompanied by the presentation of one performance: by the South African Neo Muyanga (n. 1974, Soweto), the Argentine León Ferrari (1920–2013, Buenos Aires), and the Brazilian Hélio Oiticica (1937–1980, Rio de Janeiro).

"The Bienal is beginning with a series of shows and events that introduce part of the themes that will be considered in depth in the main show, starting in September,” explains Crivelli Visconti. “Brazil and Latin America are very well represented, both in terms of the artists’ nationalities as well as the subjects they deal with, which range from social and political issues to the recovery of ancestral knowledge. At the same time, special attention is given to the power and urgency of the production within the expanded field of the African diaspora. Generally speaking, the 34th Bienal wishes to shed light on productions that deserve more attention, such as contemporary indigenous art (Brazilian and from other parts of the world) or that produced in the Caribbean.”

The first of the shows, to open in February 2020, is by Ximena Garrido-Lecca, who lives between Lima and Mexico City. Her research examines the turbulent history of Peru and explores the cultural impact of the neocolonial patterns that are transmitted through the processes of globalization. Her solo show will open concomitantly with the holding of the brand new performance A Maze in Grace, by Neo Muyanga, in which a large choir of voices will perform a new composition of his authorship, based on the song Amazing Grace, often sung as a hymn at rituals of trauma and public struggle or to create feelings of bonding at large political gatherings in different parts of Africa and the English-speaking world.

The second solo show, to open in April 2020, is by Clara Ianni, whose artistic practice explores the relation between the perception of time, of history and of space in the current context of globalized capitalism. The opening of her exhibition will coincide with the performance Palabras Ajenas (1965–1969), by León Ferrari. Palabras Ajenas is a literary collage that appropriates quotations from historical figures to construct a dialogue on violence, war and power. This work has been partially read on two previous occasions (in 1968, at Arts Lab, London, and, in 1972, at Teatro Larrañaga, Buenos Aires) and completely, for the first time, in 2017, translated into English, at REDCAT, Los Angeles. This will be the first complete reading of the work in Brazil, and in Portuguese.

In July 2020, the third solo show at the Bienal Pavilion will open, with works by North American artist Deana Lawson, who produces intimate images of people and places, often blending spontaneous, staged and found photos. Attentive to the stereotypes of Western and African portraits and committed to extrapolating their limits, Lawson produced a new set of images in Salvador (BA), as part of her series of photos that portray, with an extremely personal approach, places marked by the strong presence of cultures deriving from the African diaspora. For its part, rather than accompanying the opening of Lawson’s solo show, the last performance will kick off the large group show to be held in the Bienal Pavilion starting in September 2020: it is a performance authored by Hélio Oiticica, but never previously executed, entitled A ronda da morte [The Rhythm of Death]. The performance was conceived in 1979, when the artist returned to Brazil after living between London and New York for about ten years. It was created as a poetic and symbolic response to the optimism in Brazil following the decline of the dictatorship – a feeling the artist did not share, as he understood the many structural changes that could bring effective social justice were still lacking.

Besides the previously announced network of about 25 partner institutions in the city of São Paulo, the 34th Bienal will be held in collaboration with renowned international institutions, which will coproduce and include in their program some of the solo shows and performances. The presentation by Neo Muyanga is a joint initiative with the Liverpool Biennial (England), while the solo shows will be held with the following partnerships: the exhibition by Ximena Garrido-Lecca is being co-produced with CCA Wattis, San Francisco (USA); the exhibition by Clara Ianni is being co-produced with the Centre for Contemporary Art, Lagos – CCA Lagos (Nigeria); and the exhibition by Deana Lawson is being co-produced with Kunsthalle Basel (Switzerland). These exhibitions will be presented abroad in 2021, with the exception of the solo show of Deana Lawson, which will be on view at Kunsthalle Basel from March 27 to May 24, 2020.

“The Fundação Bienal has intensified its international work since 2016, with the creation of its International Advisory Board. The realization of the 34th Bienal – with the partnerships forged with institutions of the United States, Europe and Africa – is also part of this movement. Similarly, the experiment to be carried out with the next edition of the show, of presenting a number of smaller exhibitions leading up the main one, is the outcome of our desire to build an increasingly closer relation with Ibirapuera Park and to open the institution to the city. The Bienal belongs to everyone and we want the people of São Paulo to feel free to appropriate and experience the space and the event,” says José Olympio da Veiga Pereira, president of the Fundação Bienal.

Within the search for an enriching plurality of viewpoints and positions that characterizes the 34th Bienal de São Paulo, the curatorship of the publications has been tasked to Elvira Dyangani Ose, Director of The Showroom, London (England), an institution that now becomes a member of this edition’s network of partnerships.

On the publications of the 34th Bienal, the themes dealt with in the exhibition will serve as a starting point for a broader reflection on contemporary culture and society. Thus, just as the artworks are first presented in an initial configuration and will then return to the project enriched with a new layer of meanings, following an innovative format, the publications will consist of a set of texts and images that will be presented, over the course of a year, in various formats (such as magazines, books, newspapers and digital platforms), to then be incorporated into the editorial products that will accompany the main exhibition.

Going beyond a traditional format of merely reflecting the exhibition in an objective way, the set of publications will also seek to take advantage of the event’s open methodology, with the aim of emphasizing the impossibility of definitively crystallizing a process that is, in its essence, conceived in a way to allow for constant transformation.

Developed by artist and designer Vitor Cesar, the 34th Bienal’s visual identity embodies the poetics of the rehearsal proposed by the curatorship, developing a malleable language that can be transformed within the different contexts of the 34th Bienal. The first visual syntaxes of the system are therefore being shared now, and new ones will appear in the show’s various communication spaces over time. “Instead of summarizing everything together in a single image, the aim was to experience a visual plurality where it is possible to transit between clarity and complexity with resources created based on ideas such as encounters, crossings, links, wrinkles, folds and reliefs,” the designer explains.

Seen more as a statement than a theme, the title of the 34th Bienal de São Paulo, Faz escuro mas eu canto [Though it’s dark, still I sing], is a line from a poem by Thiago de Mello, published in the  book with the same name by the poet in 1965. In his work, the poet, who is from the Northern region of Brazil, speaks clearly about the problems and hopes of millions of men and women around the world: “Hope is universal, the social inequalities are also universal (…). We are at a moment at which the apocalypse is gaining on utopia. For some time now I have made the choice: between apocalypse and utopia, I’m staying with utopia,” the writer says. Crivelli Visconti adds: “by its title, the 34th Bienal recognizes the state of anxiety of the contemporary world while underscoring the possibility of the existence of art as a gesture of resilience, hope and communication.”

Guided by the concept of “relation,” the architectural firm Andrade Morettin Arquitetos, commissioned to develop the show’s architectural and exhibition design, proposed for the 34th Bienal to work with the idea of an intermediary dimension. This makes the pavilion’s monumental scale more intimate, allowing the visitors to make a personal connection with the artworks. According to Marcelo Morettin, “the design seeks to extend the concept of the public space of Ibirapuera Park into the building through structures analogous to public squares and sidewalks, which mimic the operation of the marquee, connecting galleries which – almost like porous buildings counterposed to the ‘urban’ scale of the pavilion designed by Oscar Niemeyer – will offer environments of a range of natures, on a more constricted scale.”